Over a span of more than 80 years, the Auto Club of Southern California conducted hundreds of mapping and research trips to the Baja California peninsula, but to the best of my knowledge, the Club had seldom or never sent someone to Cañón de Guadalupe, at least till someone invited me there in 1998. I was fortunate enough to visit the remote canyon twice while in the Club’s employment—first in ’98 and again in 2000—and would include it in future editions of Baja guidebooks.

I also resolved to return, and bring the people I love most. Little did I know that more than 20 years would elapse before I’d do so, or that my travel companion would be my yet-to-be born younger daughter. But I did make my way back, and Emily, now 16, proved worthy of the trek. This, despite a hazard-fraught, 35-mile drive from the nearest paved road, howling winds that threatened to shred our tent on the last two nights, lots of boulder-hopping to reach the best destinations, and—yikes!!!—no Internet or other communication with the outside world.

But then the best destinations are often the hardest to reach. Cañón de Guadalupe (Guadalupe Canyon) is located in the Sonoran Desert about 50 miles southwest of Mexicali and 120 miles southeast of Tijuana. It’s those last three miles or so that offer the real workout, including ridges of razor-edged bedrock, basketball-sized boulders, deep dips and ruts that require the most careful of driving, and pointy rocks just waiting to jab a hole through the sturdiest of tires.

The payoff is the grandest of settings, with a sprawling palm oasis at the base of the rugged Sierra Juarez, with the A-shaped form of Pico La Virgen (elevation 4,987 feet) towering skyward above it all. Cold water runs year-round via a series of eight waterfalls tumbling down from the sierra, while hot springs bubble up from the ground in the middle of the oasis. The family that owns the oasis (it is private property) constructed a series of campsites, each with its own pool carved right from the canyon walls, fed by those steaming, 107-degree F (40-degree C) spring waters.

Is it worth the trouble? If you’re up for the above-described drive, hauling along all your supplies, tent camping, temperamental weather, and leaving everyday comforts behind, then go for it… and please, tell me about your trip! You’ll gain a sense of deeply earned satisfaction while you ease back in that pool of swirling hot-spring water, beverage in hand, gazing up at the sierra by day or the heavens by night, contemplating your place in creation and knowing this trek was SO worth it.

I hope the photos and accompanying descriptions do justice to this destination.

David Brackney is a former travel journalist who worked for the Auto Club of Southern California from 1996 to 2008. He authored several guidebooks and guide maps on Baja, plus other destinations around the U.S. and Mexico. Before that he spent seven years living in Mexico City, working as a writer and editor at a pair of English-language newspapers.

“Although his travel journalism days are behind him (at least for now), David still loves hitting the road when he can and has a smile on his face whenever he crosses the border to Mexico. He’s also active in Club Dust, an Orange County-based group that builds homes and provides basic living supplies for impoverished families living in the Tijuana-Tecate area. A Southern California native, he lives in Whittier with his two daughters. 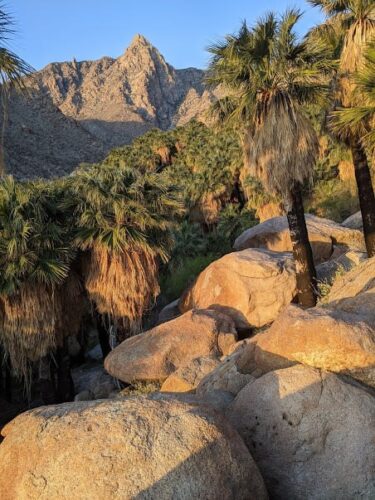 There’s Pico La Virgen catching the new day’s light, rising southwest of the canyon, with a good look at the oasis to go with it. 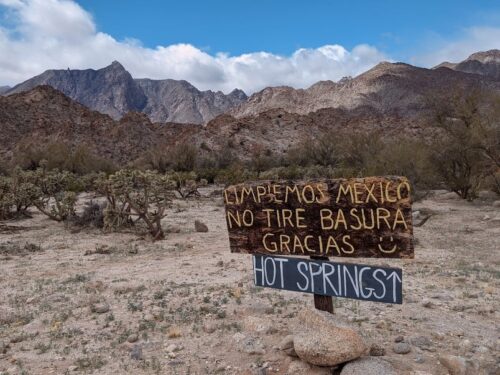 They want you to keep Mexico clean, so no tossing litter. Thanks! 🙂 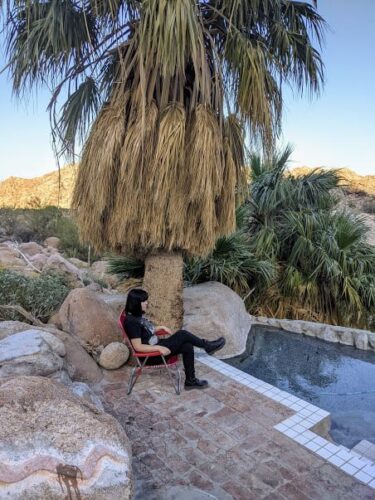 Emily, partly posing, partly pondering, next to the campsite pool.

I like this shot, as it shows the expanse of Laguna Salada, the dry lakebed we crossed to get us most of the way to the canyon. This was fast, easy driving, but the last three miles probably took as long as the first 30-odd miles off the highway. 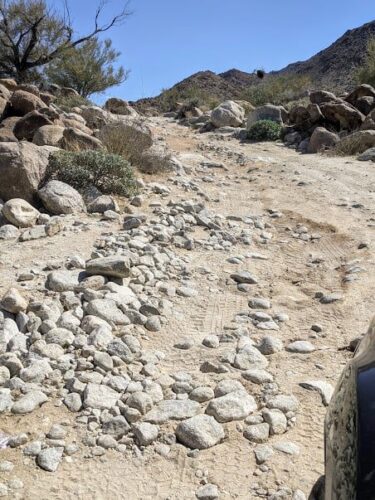 I told you the last part of the road was bad. Take a look for yourself. 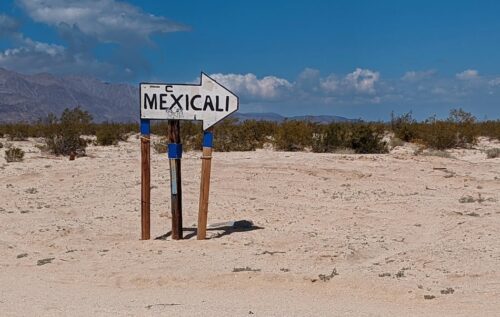 Pointing the way along the road across Laguna Salada. 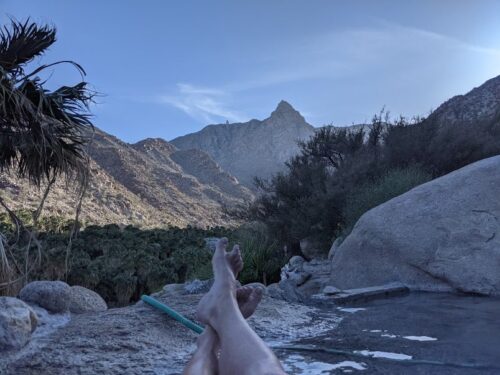 I don’t believe in those cheesy barefoot pics that the rest of you post on your fancy vacations, but every so often it’s necessary to break one’s own rules. This was such an occasion. 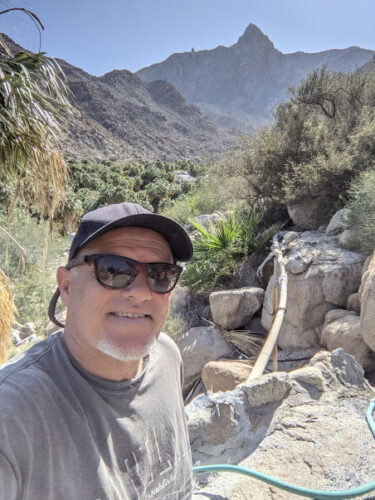 I don’t do many selfies either, but this was a good time and place for an update. 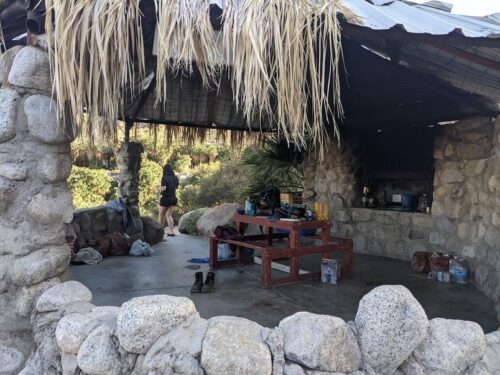 Cabana at our campsite. Good thing we had it for cooking and storing our gear when the winds picked up. 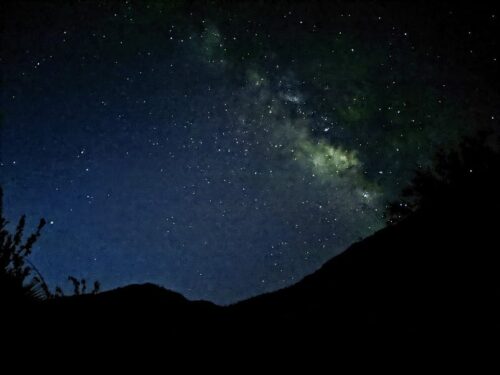 I took this pic at, let’s see, 5:36 a.m., looking east across the canyon. Let’s be honest here — you won’t actually see the Milky Way THIS bright in real life and no, the individual stars aren’t actually that big and bright, but this is what emerged from a timed exposure, making dang sure the camera stayed perfectly still. 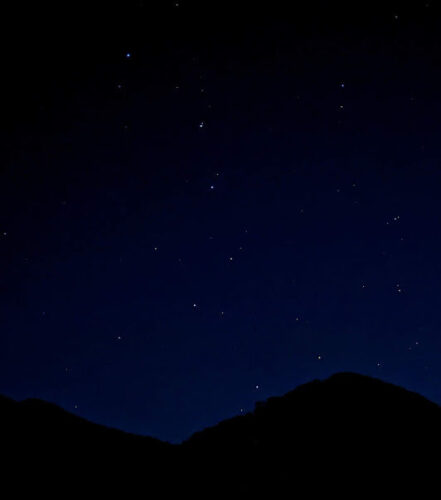 Looking here we see the Big Dipper about to dip behind a ridge, not long before sunrise. 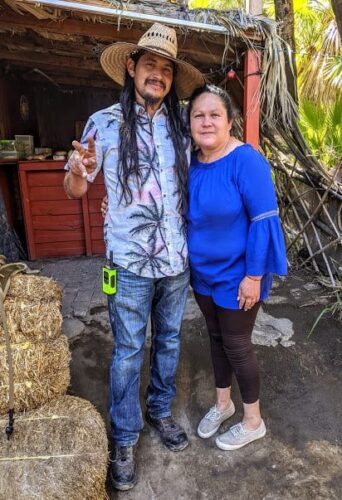 Here you have our camp hosts, Manuel and his wife Consuelo. We became fast friends, and I reckon we’ll catch up with them again when they relocate to their summer home, a ranch in the mountains south of here. 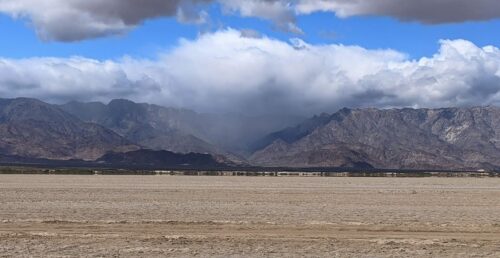 A rain squall douses a canyon along the Sierra de Juarez, on our way back to the main highway. Fortunately we were spared any such wetness. 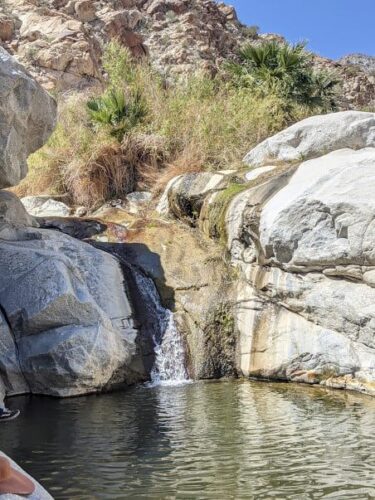 One of the waterfalls we saw while hiking up the canyon.

A 30-minute hike — including a good deal of boulder-scrambling — led us to these petroglyphs. 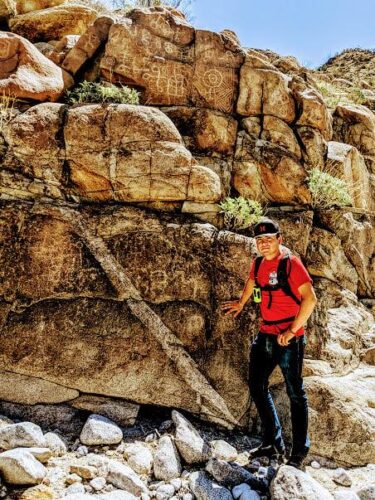 This is Julio, Manuel and Consuelo’s teenage son, who guided us to the petroglyphs. Never would have found them without him leading the way . . . 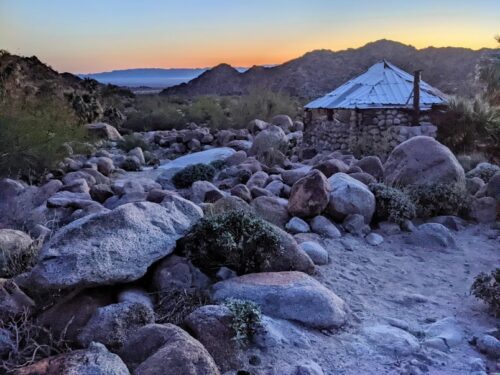 Looking toward Laguna Salada from our campsite at daybreak. 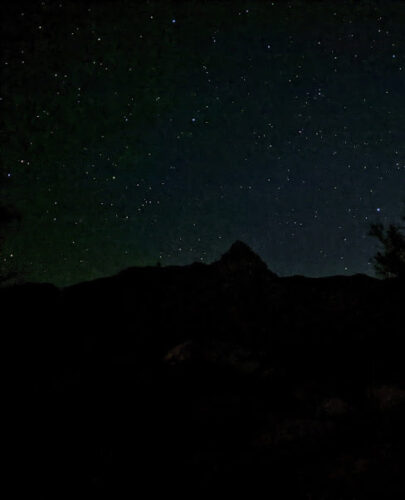