I drove down to Bahía de los Ángeles in March intending to kayak on Guardian Angel Island for a couple of weeks.

As the seriousness of the coronavirus epidemic became apparent, my plans changed. I scrapped the idea of visiting the 40-mile long island. Given the need to “socially distance,” I didn’t want to be dependent on a panga ride back and forth across the 15-mile-wide channel.

Instead, I paddled my stable sit-on-top kayak out of LA Bay and camped on a couple of gorgeous beaches a few miles south at Punta Pescador. It was a good place to “flatten the curve” as I didn’t get close to or talk to anybody.

I’ve often enjoyed camping alone in beautiful Baja, and leaving the problems of the world for others to argue about. My concerns were now more basic — wind, tide, current, shade, coyotes, and rattlesnakes.

Semana Santa came and went. I was getting all the exercise, fresh air, and sunshine I could want. Great anti-virals. I couldn’t do anything about being nearly 70, but I could make sure my heart, lungs and immune system were in the best possible shape.

There was so much to see and do. What a privilege to be paddling with whales, dolphins, and sea lions. I enjoyed turning over rocks in the desert and photographing scorpions… and rocks in the intertidal, revealing beautiful and colorful marine creatures.

Pelicans, boobies, and ospreys were there in abundance and easy to photograph.

Fishing was great. But I released all my catch. If I had a can of tuna, and the fish were fairly hooked, they were safe.

When the wind precluded kayaking, I hiked, explored the rugged shoreline, and beach combed. I particularly enjoyed finding boxes and plastic crates to enhance my campsite. But sometimes it seemed whatever I needed was right there in the driftwood.

I only crossed paths with one rattlesnake — a handsome red diamondback. But I was ever vigilant… mindful I was several hours paddling away from town.

I appreciated the brightness of more than one full moon, and the awesome starry night skies around the time of the new moons.

Judging by their tracks, coyotes investigated my tent and kayak most every night, but they never woke me or “stole” anything. Everything left out was securely weighed down or bungeed together.

If I’d employed a panga, I could have taken an unlimited supply of water and drinks. Paddling my own kayak, I limited myself to a week’s supply. Then I was increasingly dependent on my hand-pump desalinator to make drinking water from the sea. It was rated to make almost a gallon an hour, but I didn’t feel comfortable being totally reliant on a single water source. I occasionally paddled back to town to fill up my containers.

I had use of a friend’s house on the beach south of town in LA Bay. There, I was able to continue my isolation while I prepared for another excursion, and recovered, if necessary, from the previous one.

Fortunately, I was in the house when a wild west wind descended on the bay. The sudden transformation was unbelievable. Waterspouts and mists of foam flew across the sea. It was easy to understand how boaters and kayakers lose their lives if caught unawares.

Resupplied, I paddled out again to Punta Pescador. Offshore from my preferred beach, there seemed to be a major whale highway. Finbacks cruised by often. Humpbacks breached.

I looked across at the south end of Guardian Angel Island 15 miles away. It occurred to me you could fit a city the size of San Diego in that view… with all its din and pollution. Instead, there was just me, enjoying the silence, and breathing some of the freshest air in the world.

I ruled out camp fires, not wanting to put anything in my lungs but that air.

My beach and bay were well protected from all winds, except an offshore west wind.

When another strong west wind event was forecast, I moved a kilometer to a better protected sandy beach looking south to Punta Las Animas. I was less than a mile from the palapas and structures of La Unica. No pangas ever pulled in to use the palapas. I suspected there was a caretaker in residence. But I could see no one, and under the circumstances I never visited.

In April and May, if the wind dropped, noseeums became more of a problem. Repellent was a must, and it was essential to have a good tent with noseeum mesh. The skies were almost always clear, and the water looked gorgeous and blue.

After another resupply run to town (and briefly back to my home in La Misión, north of Ensenada) I paddled beyond town to La Gringa, and there crossed the mile-wide channel to camp on the west side of Isla Coronado or Smith Island. Its familiar steep “volcano” is one of the landmarks of Bahía.

It was getting hotter, and I was glad to have a couple of shady caves in the cliffs to sit out the midday sun and store food and water.

I was struck by the beautiful sunsets looking back over the peninsula. Large chuckwalla lizards were spotted on several hikes… but being warmed and shy, they quickly scurried away.

In places, I was amazed at the clouds of voracious little isopods in the shallows. If you stood still too long, you’d feel their bites. I watched an unfortunate California sea hare releasing clouds of purple ink in a vain attempt to escape.

High on the cliffs to the south, a pair of ravens had built a nest. For several days, the patient parents tried to encourage two fledglings to spread their wings and depart. The hesitant youngsters, looking down at the rocks far below, were clearly in no hurry to try their luck and leave the nest.

I enjoyed kayaking around and exploring the island, and reading the informative signs erected on many of the best beaches. Again, I spoke to no one.

Fishing was great for bass and halibut. I still had no need for food, so I happily released everything.

One day, I hooked the biggest fish of my life. For 20 minutes it dragged the kayak out into the channel. Having stripped most of the line, I worried it would break the pole or pull it from my hands. I couldn’t get the fish to the surface to see what it was. It eventually spat the lure. I suspect it was a large yellowtail. Earlier that day I’d watched a school of yellows chasing baitfish around the bay.

So much for my initial intention of kayaking for two weeks. I ended up spending much of March, April, and May in and around LA Bay.

Knowing the difficult times experienced by so many others, I have appreciated it as never before. And it’s always been one of my favorite Baja destinations.

I was so glad to have the kayak… and to have my friend’s beach house to return to and isolate. 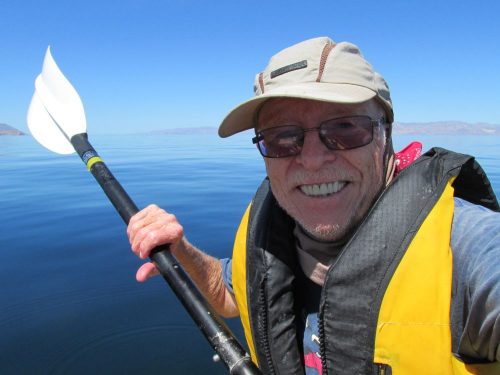 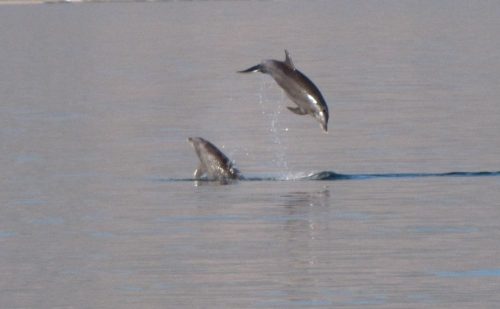 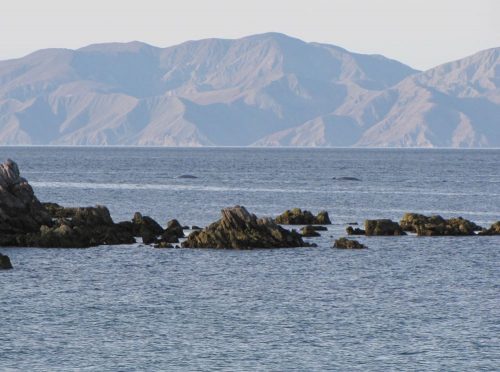 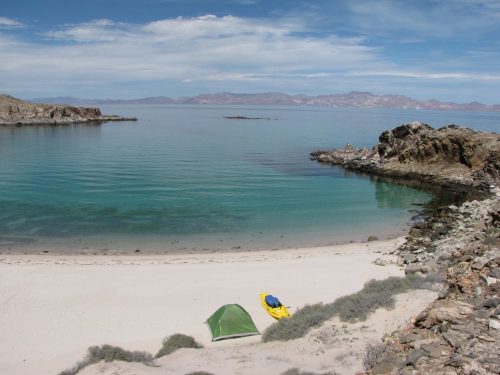 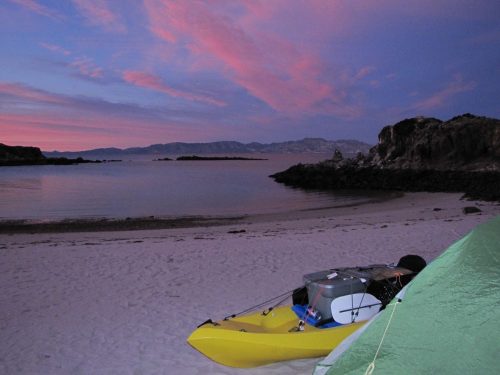 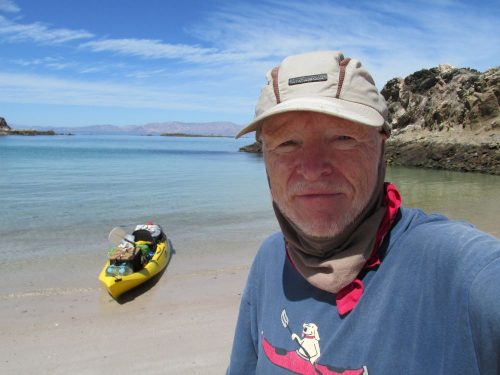 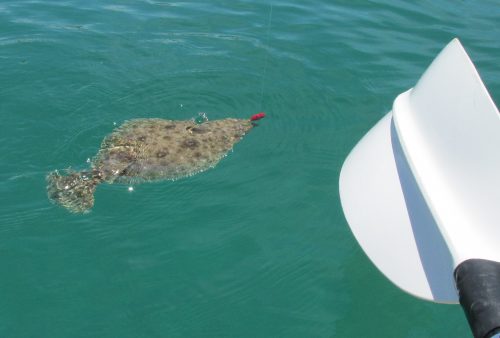 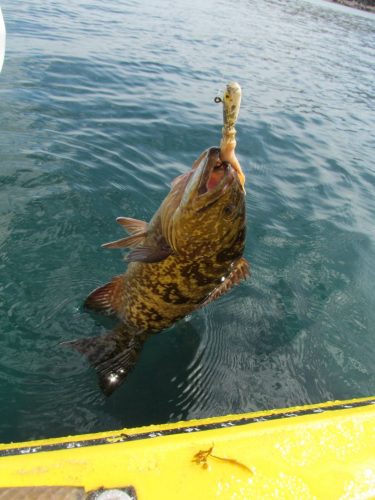 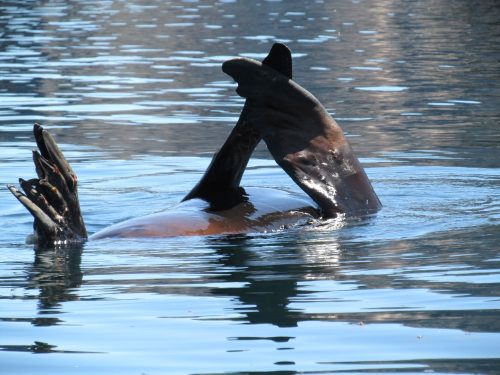 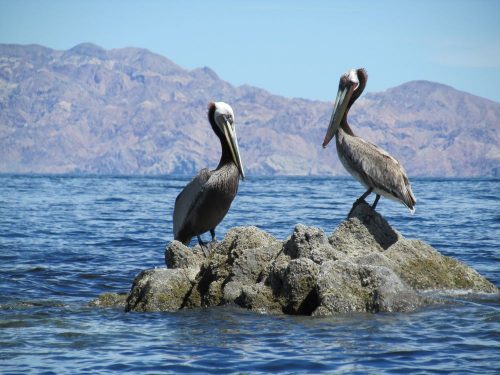 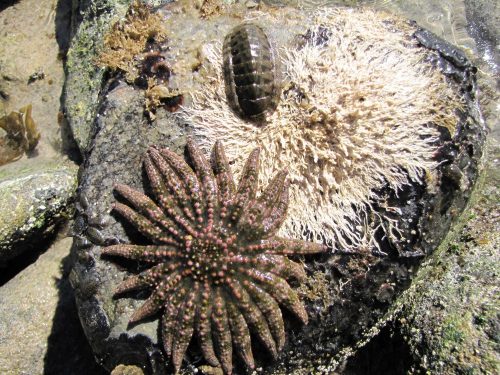 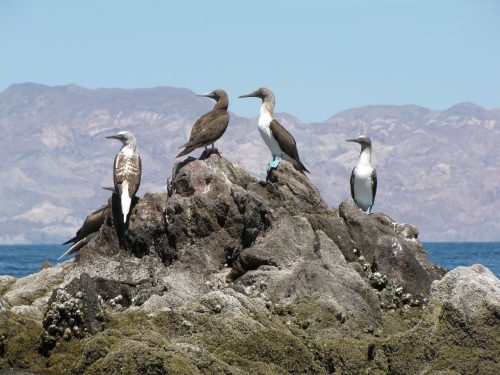 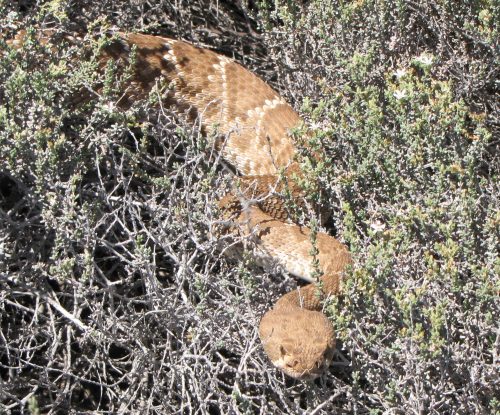 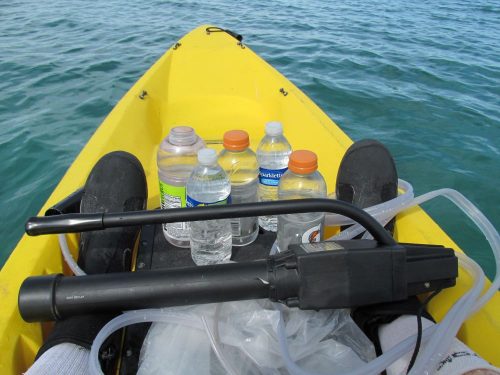 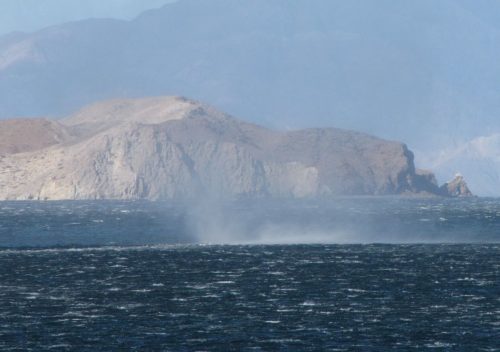 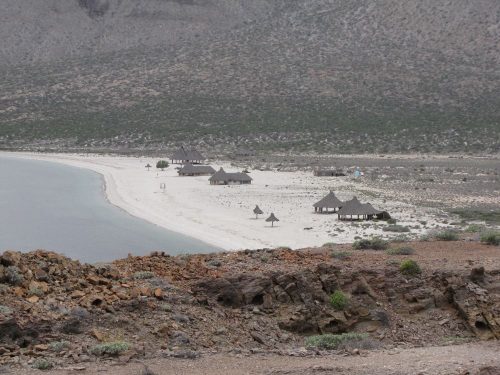 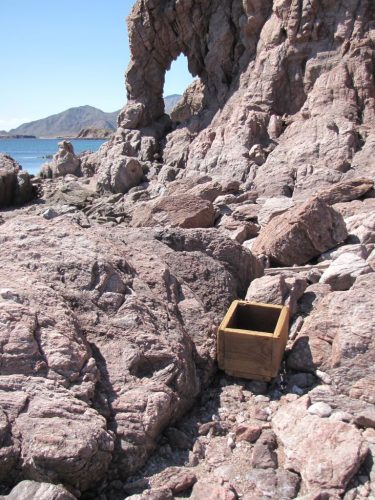 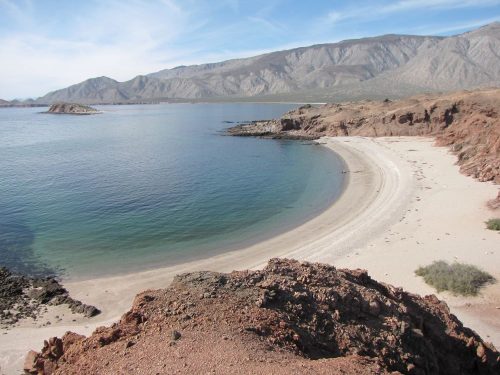 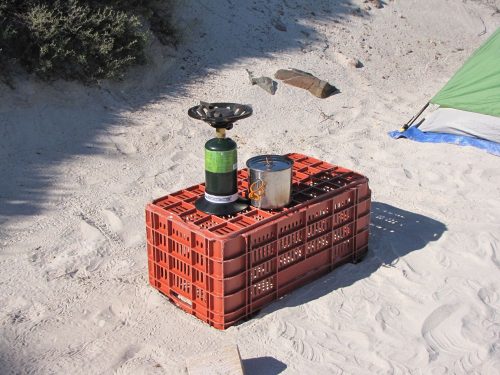 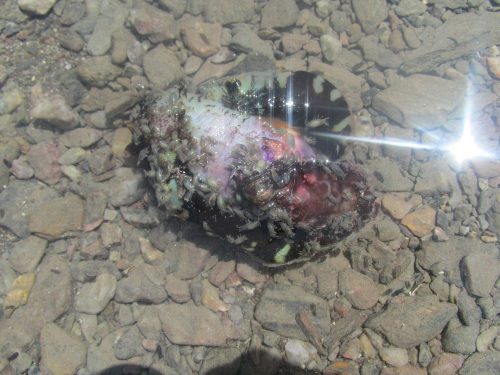 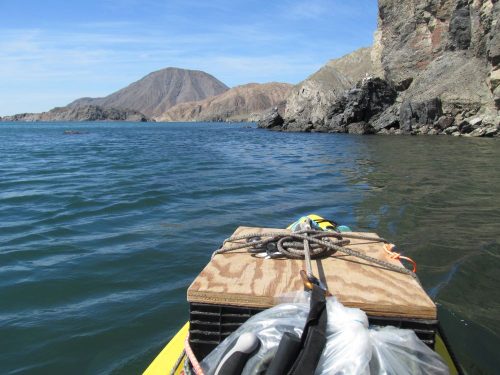 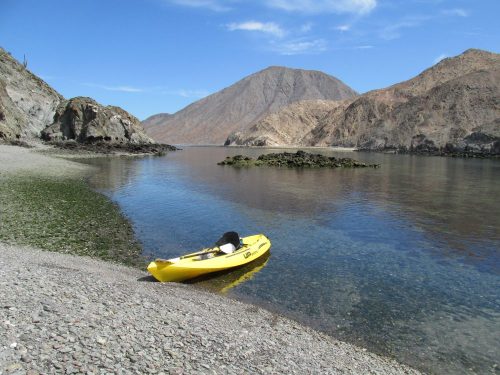 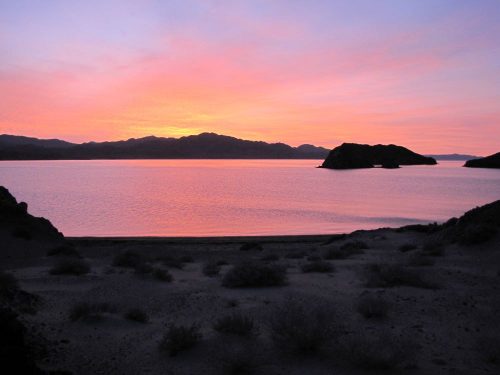 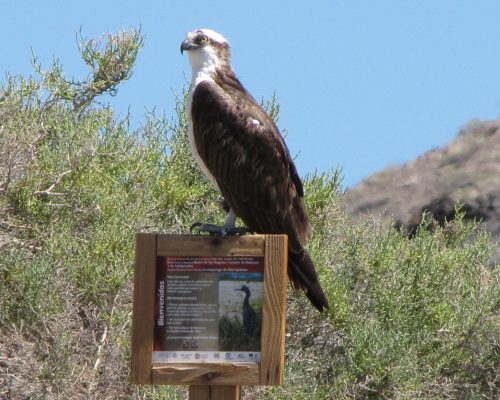 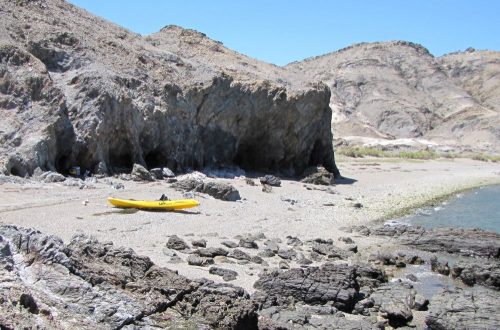 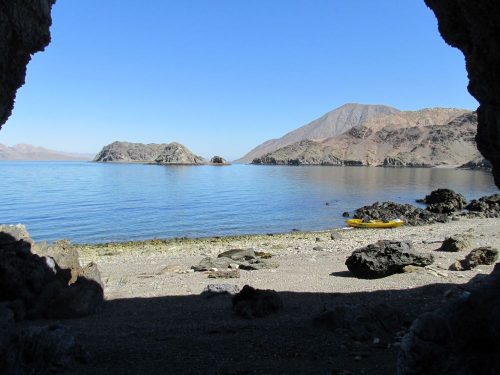 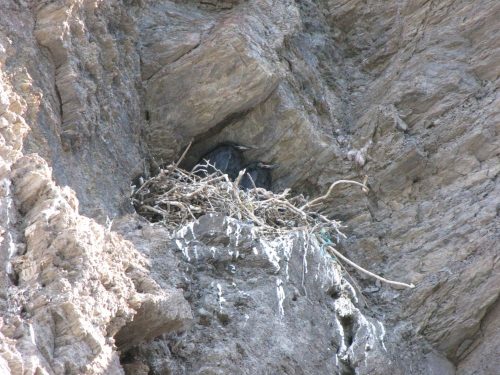 « July 2020 Baja Bulletin
Wine Tasting in the Time of COVID »

6 thoughts on “Flattening the Curve in Bahía de los Ángeles”